A Song for Bellafortuna by Vincent B. "Chip" LoCoco (author interview and giveaway)

I love discovering new authors, especially when they write a novel set in Italy. This one is set in Sicily and is a historical fiction, one of my favorite genres. Although my parents are from Rome and Abruzzo, I have a lot of friends whose parents are from Sicily, and I've learned to understand the dialect, which is almost a language in itself!

So let me introduce you to Vincent B. "Chip" LoCoco and his second novel. First off, isn't that a gorgeous cover? Makes me want to hop on a plane to Italy, like right now. The minute I read the book's description, I knew I wanted to read this story: a family saga revolving around wine, olive oil and opera? It appealed to my Italian blood, alright. And this book pulled me right into its story from the first page. So watch out for my review of A Song for Bellafortuna on Library of Clean Reads on Sept 14! 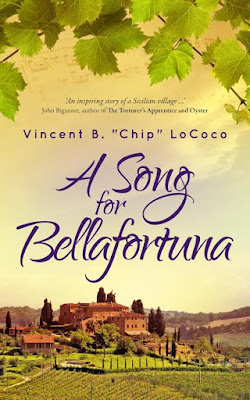 A Song for Bellafortuna is an inspirational Italian Historical Fiction novel concerning a young man's desire to free his Sicilian village from the domination of one family's long reign.

For years, the beautiful, yet secluded, hilltop village of Bellafortuna, Sicily, was a great producer of wine and olive oil. The entire village prospered. However, after the arrival of the Vasaio family, production dwindles and the villagers soon find themselves in crushing debt to the Vasaios. Only one family in the village remains outside the control of the Vasaios, but the reason haunts Antonio Sanguinetti every day of his life. Antonio is determined to erase this legacy by offering financial and emotional support to his fellow villagers. He introduces them to the choral song from Verdi's opera, Nabucco, which becomes the rallying cry for the villagers and offers them hope for a better life.

When Antonio's only son, Giuseppe, discovers his family's past, he becomes determined to take on the Vasaios and remove them from power. Led by the young Giuseppe, a plan is hatched that could result in either complete freedom for the villagers, or if it fails, forever solidifying the Vasaios' control. Find out what happens in A Song for Bellafortuna, a sweeping epic historical fiction tale of love, drama, sacrifice, and redemption, set among the beautiful landscape of Sicily.

Where to buy the Book:

An Interview with Vincent B. "Chip" LoCoco:


EI: If you could describe your novel in one sentence, what would it be?

VBL: A passionate story of redemption and sacrifice, set among the beautiful landscape of Sicily.

EI: What does it mean to you to be an Italian- American?

My great-grandfather, Castranzio LoCoco, came to New Orleans from Cefalù, Sicily in 1890. New Orleans is a unique place. So many Sicilians flocked here because of the agricultural life that was similar to the one they left in Sicily. It seems the main reason for the Sicilians coming to New Orleans all around the same time has to do with employment. As the Louisiana farmers lost more and more workers after the Civil War, a call went out to Sicily for those looking for a better life and work in America. The Sicilians answered the call and came by the thousands. But here is the key. Yes, they assimilated into the American culture, but they kept their own customs as well, and introduced those customs into the New Orleans society. These customs were related to food, music and religious rituals. They also kept their strong sense of family and a commitment of living life with passion.

So for me, being an Italian-American means a person who is fully American, yet fully aware of where his/her ancestors hailed from, and incorporating some of those customs from the old county into his/her own life today – and to do it with passion.

EI: How interesting. I did not know that about New Orleans and the Sicilian immigrants. Do you speak Italian or the Sicilian dialect? If so, have you passed the language on to your children?

VBL: I do not speak Italian or the Sicilian dialect. However, I do know phrases and Italian words, which does allow me to understand Italian. Don’t laugh when I say this. I learned Italian from opera librettos. I taught myself words and phrases from the operas I adored. The words I knew best were love and death, since my Italian class was opera.

Growing up in a large Sicilian family did introduce me to the language. My Sicilian relatives spoke some phrases, and when they got excited, would speak in Italian, all of which gave me a love of the language. I try to show in my novels a sense of the beauty of the language. Because I do not speak it, I always use Italian readers to assist me in correcting my mistakes. They get a kick out of American style of Italian I use – as they call it.

EI: Have you ever been to Italy? What are some of your experiences with the country of your ancestors?

VBL: I have been to Italy twice in my life. The first was with my parents and sisters when I was in College. Did the normal Rome, Florence and Venice. I fell in love with the place, as we immersed ourselves into the cultural as much as we could. My father had studied in Rome for 2 years, so he loved taking us around to all of his old haunts.

My second visit to Italy was with my wife. What a magical trip. We travelled all over Italy, and were both convinced that the further South you go, the more beautiful it becomes. Sipping wine at on outdoor café or listening to music in a piazza with someone you love makes for a unforgettable experience. Also, spending the night in Assisi in an old Monastery after all the tourist left was something we will never forget.

EI: Are you working on another novel? Can you tell us a little about your writing journey?

VBL: Let me answer this question by first telling you about my writing journey. I was a history major and I am a lawyer. I never thought I could write a novel. After my son was born, a story came to me about an opera singer growing up in Milan. I outlined the story that night and began writing. My first novel, Tempesta’s Dream, was the result. Then, along came my daughter, so I knew I needed another book. Somehow, the idea of A Song for Bellafortuna came to me. I know the idea of a book that involved Caruso and a village was the impetus.

As for my next book, the joke is I only write when I have a new child, so my wife says my career is over. We shall see. I mean about another novel, not another child.

At this point, I do have germ of an idea about Italian and German POWs during WWII who were shipped to Louisiana and worked on Sugar Cane Plantations. My family has such a farm, and those same German and Italian POWs indeed worked on our farm, sneaking out at night to meet the local ladies. But that is another story.

EI: Oh my gosh, that sounds wonderful! I hope you write that story.

VBL: Thanks for wanting to know a little bit about my writing career and me.

EI: Thanks so much for taking the time to answer my questions! I'm looking up your first novel Tempesta's Dream. 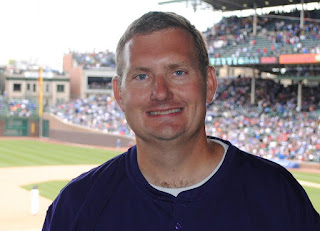 Award winning and bestselling author, Vincent B. "Chip" LoCoco, lives in New Orleans. His first novel, Tempesta's Dream - A Story of Love, Friendship and Opera, became an Amazon bestselling novel and was awarded the 2014 Pinnacle Achievement Award in Historical Fiction. Amazon also has named his book as a Top Rated Novel in Italian Historical Fiction.

His most recent novel, A Song for Bellafortuna, was shortlisted in the William Faulkner - William Wisdom Competition. He is an estate planning attorney in New Orleans, where he lives with his wife and two children.

Posted by Laura at Library of Clean Reads at 4:48 AM