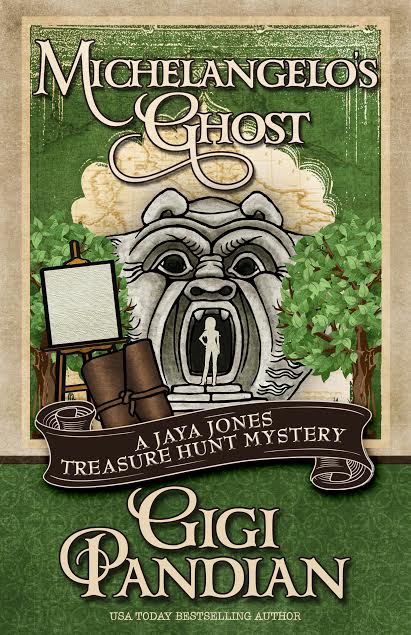 A lost work of art linking India to the Italian Renaissance. A killer hiding behind a centuries-old ghost story. And a hidden treasure in Italy’s macabre sculpture garden known as the Park of Monsters… Can treasure-hunting historian Jaya Jones unmask a killer ghost?

Filled with the unexpected twists, vivid historical details, and cross-cultural connections Pandian is known for, Michelangelo’s Ghost is the most fast-paced and spellbinding Jaya Jones novel to date.

When Jaya’s old professor dies under eerie circumstances shortly after discovering manuscripts that point to a treasure in Italy’s Park of Monsters, Jaya and her brother pick up the trail. From San Francisco to the heart of Italy, Jaya is haunted by a ghost story inexorably linked to the masterpieces of a long-dead artist and the deeds of a modern-day murderer. Untrustworthy colleagues, disappearing boyfriends, and old enemies—who can Jaya trust when the ghost wails?

“Charming characters, a hint of romantic conflict, and just the right amount of danger will garner more fans for this cozy series.” – Publishers Weekly on Quicksand

“Pandian’s sprightly prose celebrates the pleasures of Italian painting, food, and landscape. The light touch, swift pace, and verve maintained throughout the novel disguise the deeper thought and scholarship underpinning the story, which like the stage props of a conjurer, make the magic happen.”– Linda Lappin, Author of Signatures in Stone: A Bomarzo Mystery
​
Buy the Book: Amazon ~ Barnes & Noble


My Review
Reviewed by Laura Fabiani

Every year there is a book that I consider to be a hidden gem, a book from which I wasn't quite sure what to expect that turned out to be one of my favorites of the year. This time, Gigi Pandian's latest treasure hunt mystery novel happens to be my hidden gem.

Jaya Jones is a treasure-hunting historian (I grew up watching Indiana Jones' movies) so her character really appealed to me. In this fourth instalment Jaya travels to Italy after she studies some manuscripts that point to the possibility of finding lost art, in particular paintings from a Renaissance Italian artist that lived for a time in India. I loved how the author connected two cultures. Jaya is of Indian descent and she links the current story (lost Renaissance art in Italy) with Indian art too. The flavors of Indian and Italian culture are interspersed throughout the novel.

I also loved that this book was set in the little-known Park of Monsters (Parco dei Mostri) also known as Gardens of Bomarzo in Italy. I have never been there although it's not far from Rome and now I really want to visit it! Jaya explores the park, and although the villagers warn her about the ghost that has been haunting the area since the 16th century, this does not deter her. The author cleverly builds on people's superstition (Italians are very superstitious) with art history, in particular that of Michelangelo's to create a suspenseful mystery with a gutsy heroine. Very clever plot!

I thoroughly enjoyed this mystery novel, its characters and the tone of the series. The story was fun, had some romance, lots of mystery and suspense and a great brother/sister relationship. It's fast paced with short chapters that makes the reader want to read just one more because of the cliffhanger endings of each one. Yeah...I read well past my bedtime.

Although this is the fourth book in the Jaya Jones Treasure Hunt Mystery series it's a stand alone novel and can easily be read on its own. It did make me want to read the first three books when references were made to Jaya's past adventures in other countries. Reading this book made me a fan and I will be looking up Gigi's past three novels in the series. 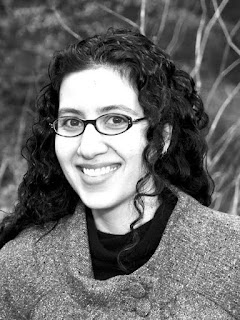 USA Today bestselling author Gigi Pandian is the child of cultural anthropologists from New Mexico and the southern tip of India. She spent her childhood being dragged around the world, and now lives in the San Francisco Bay Area. Gigi writes the Jaya Jones Treasure Hunt mysteries, the Accidental Alchemist mysteries, and locked-room mystery short stories. Gigi’s debut novel, Artifact, was awarded a Malice Domestic Grant and named a “Best of 2012” debut by Suspense Magazine. Her fiction has been awarded the Lefty Award and short-listed for Macavity and Agatha Awards. Sign up for her email newsletter at www.gigipandian.com/newsletter.

One grand prize winner will receive:

- Signed copies of the first 3 books in the series
- 6 book-themed recipe cards from the locations where each book is set (Italy, Scotland, India, France, and the US)
- $20 gift certificate to the winner’s favorite bookstore 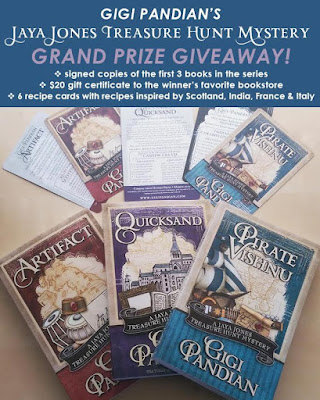 Posted by Laura at Library of Clean Reads at 5:54 AM