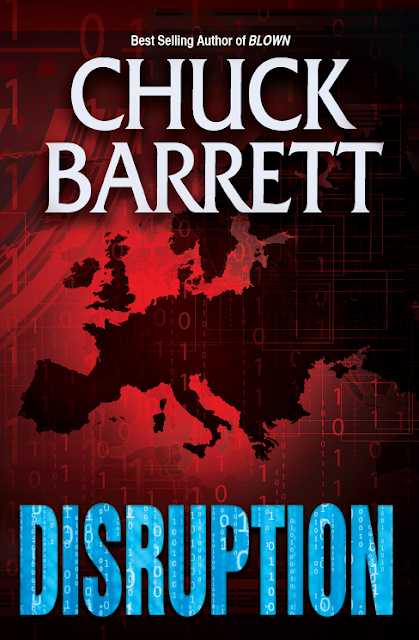 Today I'm kicking off the blog tour for DISRUPTION, the third book in the Jake Pendleton series, which is mostly set in Italy — Rome, Venice, Florence...I asked the author about the setting and he told me about his experiences in Italy. Scroll down to read his guest post about how visiting Italy led to key places in his latest cyber thriller DISRUPTION. I enjoyed this action packed novel so look out for my review tomorrow on Library of Clean Reads!

Former Naval Intelligence Officer turned secret operative Jake Pendleton finds himself in a pulse-pounding race to stop a cyber-terrorist from releasing a string of the most heinous cyber-crimes the world has ever seen. Crimes that could render the world’s advanced technology useless.

Jake teams with his partner, Francesca Catanzaro, to track down their only lead, a white-hat hacker in Italy known only as The Jew. A man who might hold the key to stop a group of black-hat hackers from causing worldwide chaos—tag named Disruption.

After a search of the hacker’s flat in Rome turns up empty, Jake and Francesca follow the clues—a trail of dead bodies that leads them across Europe. Along the way, Jake discovers a possible link between recent hacks and a Malaysian airliner that mysteriously disappeared.

In the final adrenaline-charged moments before Disruption, Jake and Francesca find themselves in a high-voltage race to stop these cyber terrorists from unleashing destruction against their sworn mortal enemy.


Winter 2014: My wife and I had talked about it for years, but kept putting it on the back burner. You know the one, I'll get around to it someday. We weren't getting any younger, you know, so we made the decision to book a two-week tour of Italy. We checked all the tour sites and finally, after painfully exhaustive internet searches, settled on the tour we thought would meet our wants and desires. Overnight cities included in the tour—Rome, Volterra, Monterosso (Cinque Terre) and Florence along with a three-night add-on in Venice. The Venice add-on was our idea, I mean you can't go to Italy and not go to Venice, right?

At the time, I had just started writing my 4th novel, BLOWN, the first in the Gregg Kaplan series and hadn't put much thought into to 5th novel. All I knew was that it would be another Jake Pendleton series thriller since I had made a promise to my readers, followers, and fans who wanted to see Jake in action again. As I mulled over the trip to Italy, I made some concrete plot decisions (about a book that, yet, had no plot…or idea of any kind) and the decision was that I would use as much of the trip as I could in the book, so Italy had to be the main impetus in setting. By Fall 2014, the first draft of BLOWN was complete and I was knee-deep in the editing process and had not given one iota of thought to the plot of book 5 except that I knew I would have someone being held captive and wanted a blow-your-mind kind of dungeon setting for him. Besides, Jake's partner, Francesca Catanzaro, is from Italy, so the setting had an added flair…and Jake had a built-in translator!

Let's get to Italy, shall we? Research notebook in hand at all times. After all, I wanted to be able to write the trip off as research.

Arrive in Rome—Welcome to the chaos that is Italy! I'm not sure Italy has ever had organization of any kind…in anything. We landed in Rome before 6:00 a.m. and weren't able to get away from the airport until after 9! I was very tired from an all-night flight with very little sleep, my blood-sugar was low, and nobody spoke English. Some tried, but their accent made if nearly impossible to understand a word. BTW, I don't speak Italian either, which added to confusion. Besides, even if I did, it would have comedic. Can you imagine someone speaking Italian with a Southern accent? And mine can be very strong at times.

Moving on…Day one in Rome. Pessimism had kicked in full force. I already had a very dismal outlook for this trip and we had only been in the country a few hours. After a nice long nap, we took an afternoon stroll through the ancient city. Late afternoon storms pushed us inside a locals only ristorante. No one spoke English…AGAIN. But, somehow, we got past the language barrier. Our only faux pas was that we thought we had ordered two glasses of wine and ended up with a whole bottle. We never drink a whole bottle at one sitting…until Rome! It changed our outlook. The skies cleared, nighttime fell, and Rome transformed into the most fascinating and magical place I'd ever seen. My opinion of Italy flipped 180 degrees.

The next day we met up with our tour group and made a lot of new friends. Three nights in Rome. The only part of Rome I didn't care for was the Vatican, and that's mostly due to the crowds. Our last night in Rome, after a late afternoon visit to the Colosseum and Roman Forum and a fantastic dinner with 8 of our fellow tour members, we all traveled back to our hotel by subway. Walking down the tunnel that led from the subway to the street, we noticed paper money (Euro) flying down the corridor. We turned and money was coming out the bottom of one of our tour member's pant legs…seems he slipped his money behind his money belt instead of in it. It was a joke that lasted the entirety of trip. 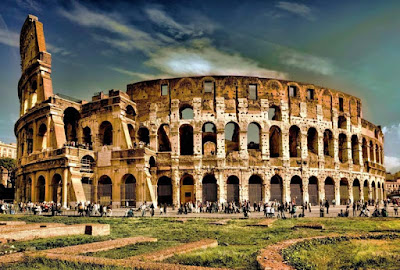 The next day we ended up in a little mountaintop village called Volterra. For those who might not know, and I certainly didn't, Volterra is the town that gave Stephenie Meyer her inspiration for Twilight. It also gave me the perfect dungeon for DISRUPTION! On our second night in Volterra the entire tour group attended a private wine tasting and dinner in a cellar at one end of town. The cellar floor dated back to the Etruscan time era…2500 plus years ago. It even had a sub-cellar that was older. That became the perfect setting for my captive. But there is more… 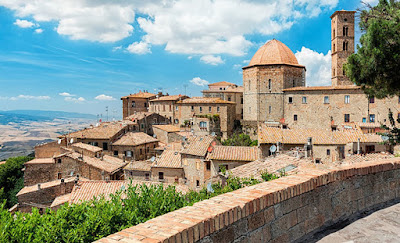 Move along to Florence. We stayed in this old hotel only two blocks from Uffizi Gallery. Attached to hotel was a tower, one of the tallest remaining towers in Florence. Atop the hotel tower is the Tower Bar, what a perfect spot for a sniper assassination! ☺

For me, Venice was the letdown of the trip, but I did get some good material to use in the book, especially in what is called the Jewish Ghetto.

As it turned out, I couldn't accomplish everything I set out to in DISRUPTION in Italy alone. I needed more to finish off the story and it couldn't take place in Italy.

A little less than a year later, my wife and I took another tour which included Germany, Austria, & Switzerland. Germany provided a wonderful setting for the casino scene in Baden-Baden. (You'll have to read DISRUPTION to find out why), but the kicker was Austria. Vienna provided a lot of good material, but the tiny lakeside village of Hallstatt cinched the ending. (Again, you have to read the book!)

Of all our travels, Italy is where my wife and I have that burning desire to return. Although off to a shaky start, our two week tour of Italy was the most enjoyable we've ever taken.

I can't wait to go back! 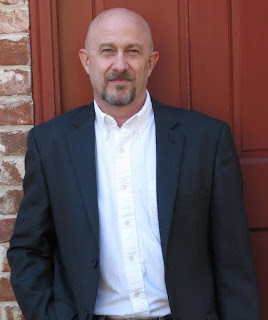 Chuck Barrett is the bestselling author of the Award-Winning Jake Pendleton series—Breach of Power, The Toymaker, and The Savannah Project, as well as his latest award-winning blockbuster, BLOWN, the first book in his new Gregg Kaplan series.

In addition to writing thrillers, Barrett speaks and conducts workshops at book festivals, book clubs, reading groups, writers conferences, and writers groups. Some of his topics include Nuts & Bolts of Self-Publishing based on his book—Publishing Unchained: An Off-Beat Guide To Independent Publishing—as well as, Blueprint for a Successful Book Launch, Getting from ‘Idea’ to ‘Finished Manuscript,’ Mysteries & Thrillers: Fact or Fiction, and Adding the “What if” in Storytelling.

Barrett is a graduate of Auburn University and a retired air traffic controller. He also holds a Commercial Pilot Certificate, Flight Instructor Certificate, and a Dive Master rating. He enjoys fly fishing, hiking, and most things outdoors. He and his wife, Debi currently reside in Colorado.

Posted by Laura at Library of Clean Reads at 4:21 AM